OUR fantastic Randpark Club is 80 years old this year and, most will agree, it has in that time become one of the top golf clubs in the country. The best? Maybe we’re biased but, seriously, we might well be the best.

“And, goodness, what fantastic condition Firethorn was for this year’s SA Open,” says Dale Hayes, champion golfer turned commentator who has seen the top tournament courses all over the world in his playing days and travels. “Okay, maybe Augusta National aside, but, condition-wise, you won’t find a top tournament course anywhere in the world that Randpark is at least equal to and in many cases better than.” Hayes, incidentally, as a young 21-year-old won the 1973 Corlett Drive Classic at Randpark (played on what is now Firethorn) with a score of 274. “The course was so open then with the trees only about a quarter of the height they now are,” he reveals.

Koos Loots hasn’t been at Randpark for all 80 years! But the former Club Captain and President has been a member for 42 long years, has seen a lot in that time and still plays a good game by the way. “Both courses have changed so much for the better over the years, and both have their own unique challenges and today are popular with both members and visitors,” he says. “Both are more difficult than they used to be and Firethorn, if played off the very back tees would be, I believe, second only to Sun City in length among South Africa’s courses. This year with the pandemic the club had to lay off 40 staff and cut the budget by R20-million yet still managed to produce an absolutely magnificent Firethorn for the SA Open, and I take my hat off to the greens staff.”

The club has had some distinguished CEOs over the years, including the long-serving Jimmy Metcalfe, the visionary that was Doug Bain before his untimely passing as a relatively young man, and now another visionary in current incumbent Francois Swart. So the men at the top have been strong and this has brought rich rewards for the club. And there have been some top home club professionals, birdie-busting Cobie Le Grange being one example, and swing guru Martin Whitcher another.

Over the years the club has hosted many tournaments for professionals, amateurs, men and women and juniors, including the 1985 SA Women’s Stroke Play Championship won by Belgium’s  A Van der Haegen, and, that same year, the SA Women’s Amateur with South Africa’s Wendy Warrington taking the honours. And as for Ashley Buhai (nee Simon) – well, to use her own saying, Ash has made some cash here!

And Randpark can lay claim to have been the launch pad for a number of world-class players, among them John Daly and Retief Goosen. Perhaps not every Randpark member will know that the notorious, big-hitting Daly won the AECI Charity Classic – which was part of the FNB Tour (now the Sunshine Tour) and held for a number of years at the club – in 1990. It was one of the big money summer events at the time and attracted an impressive international line-up. Big John was not very well known at the time, being a professional of just three years standing. But the young, blond American kid blitzed Randpark (now Firethorn) with a 10-under-par 62 en route to victory by one over David Feherty. Daly later admitted that the win helped him believe he could compete at the highest level and just a year later he won his first Major, the US PGA Championship. Other Charity Classic winners at Randpark included Tony Johnstone in 1984, Mark McNulty in 1987 and Wayne Westner in 1991.

Goosen, in turn, will always look back at his 1995 South African Open success at Randpark as a turning point in his career, one in which he proved to himself that he would one day belong on the Major champion stage. It was only his third victory as a professional, the previous two wins being in smaller ‘winter tour’ events in South Africa. And it led to a newspaper headline of “Sleepless Night, Dream Day.”

The Goose eagled the closing hole on what is now Firethorn for a five-shot win on 13-under-par 275. And after he’d sunk the winning putt, he revealed that he had hardly slept the night before. “I was pretty nervous on the first tee at the start of the final round and throughout the day had to keep telling myself to calm down. And having the world’s best player breathing down my neck only added to the pressure. But it turned out to be a dream day.”

That player tugging at his heels happened to be none other than Ernie Els, who was indeed world No1 at the time after winning both the US Open and World Match Play Championship in 1994. Goosen sealed victory with a magnificent eagle three at the 18th – then a par-5, now a brutal par-4 – in the final round. He rifled a one-iron down the middle, then a five-iron to a metre from the cup before rolling in the putt to prevail by five from Els.

Louis Oosthuizen, of course, won the 2018 South African Open at Randpark on 18-under-par 266 to join Bobby Locke, Gary Player, Bob Charles, Els and Henrik Stenson as the only players to have done the British Open-SA Open “double”. And Branden Grace did the business in the 2019 SA Open at our club, carding a magnificent nine-under-par 62 on Firethorn in the final round.  And in this year’s SA Open Denmark’s Joachim B Hansen produced a strong back nine of three birdies in five holes from the turn to win a tense final round battle with SA’s big hitting Wilco Nienaber and claim his maiden European Tour victory on 19-under-par.

Randpark was formerly known as Windsor Park and founded late in 1940 with the formation of a committee, the recruitment of 123 members and the Windsor course (now leafy Bushwillow) – designed by the great course architect Bob Grimsdell – opened for play. Firethorn (formerly known just as Randpark) was designed by Sid Brews and opened for play in 1975.

Piet Vosloo was one of the great pioneers that helped Randpark develop into the superb 36-hole facility that it is today. Back in the day a company, Windsor Park Limited, was formed to assist in capital development and Vosloo became chairperson of the company for 34 years.

On behalf of the company, once Windsor Park was up and running, he purchased an additional piece of ground and the company then developed our club’s second course.

Now a new clubhouse was needed to be suitably positioned to serve both courses as the old clubhouse was situated just off Republic Road, where the new Absa building is now. To finance this ambitious project, the company arranged a loan with Sanlam and developed a township on the ground surrounding the club. With the assistance of the many members who purchased shares in Randpark Club Limited, and the support of the companies who took up large blocks of shares in the company, coupled with the sales of the stands, the company was able to pay for all the capital development and repay its loan to Sanlam. 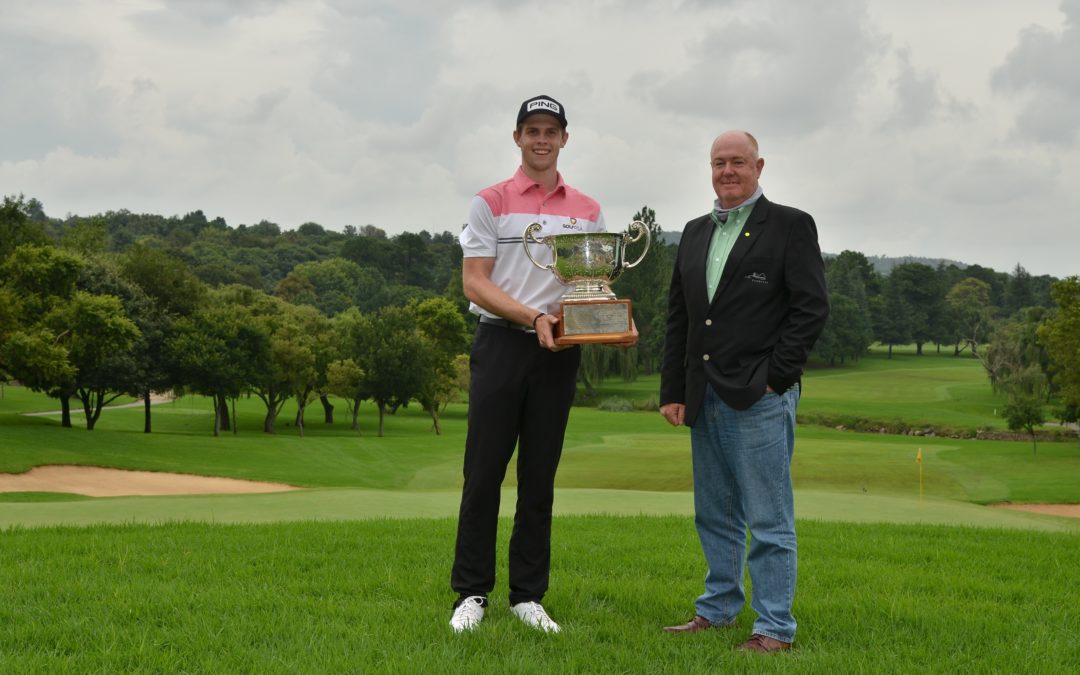